One of the most dramatic societal transformations of the last century has been the mass migration of people into cities. People make trade-offs of all kinds when choosing to live in urban, suburban, exurban or rural communities: convenience, air and water quality, transportation, to name a few. But for a number of socio-economic reasons, the United Nations estimates that by the year 2050, 66% of the world’s population will be living in urban environments.

This rapid urban growth over the next 35 years will pose a number of challenges including congestion, aging infrastructure, public safety and energy management just to name a few. With limited resources, municipal leaders are looking to the Internet of Things and advanced communications networks to make their communities more efficient. Some cities are rolling out energy-efficient smart streetlights, car sharing and smart parking. In addition to our award-winning FiOS and 4G broadband networks, Verizon is helping to remake cities by offering a suite of smart city solutions, including: 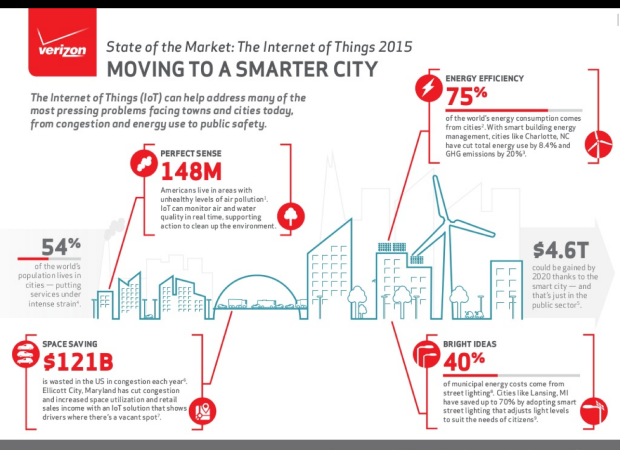 Real world examples
So, how are these technologies put to use in the real world? Take Charlotte, North Carolina, where we’ve partnered with Duke Energy and several local civic leaders to implement a smart energy program inside more than 60 buildings in the commercial business district. The buildings are outfitted with smart meters, which collect energy usage data and send it to the Verizon cloud. Special kiosks inside the building allow users to view usage data alongside information for reducing their energy consumption. This program has reduced power usage in the city by 8.4% in two years, saving Charlotte over $10 million.

In Lansing, Michigan, we worked with our Innovation Program partner Illuminating Concepts to install smart streetlights. Retrofitted with LED bulbs, these connected lampposts are able to support emergency call buttons and digital signage while reducing overall energy and maintenance costs.

And in Oregon, Verizon Telematics is helping the Department of Transportation test a usage-based tax collection system where drivers pay based on the number of miles driven, as measured by an in-car measurement device.

In short, “smart cities” are connected cities. The White House also recently announced a new Smart Cities Initiative that will invest over $160 million in federal research and leverage more than 25 new technology collaborations to help local communities tackle key challenges such as reducing traffic congestion and improving the delivery of city services. Although private investments of more than $100 billion in advanced communications networks have laid a sound foundation for future growth of smarter communities, the networks of tomorrow will need to be larger, smarter and faster. That’s one reason why Verizon recently announced that we will begin field tests of 5G wireless technology in 2016.

Integrating the Internet of Things
Integrating city infrastructure into the Internet of Things is a challenge we’re excited to undertake. But as we’ve explained, continued innovation to build and improve on the smart infrastructure for the next generation will require new wireless spectrum. Consumer demand for mobile bandwidth is rapidly growing, and entire cities’ worth of wireless sensors, nodes, kiosks and roads will come online in the next few years, fueled by an invisible resource: spectrum. As Congress and the Administration think about policies to encourage “smart city” innovation and adoption, they should look to policies that not only repurpose specific spectrum bands for mobile broadband, but that also provide long term incentives to federal users to make more efficient use of their spectrum. Focusing on these policies will make more spectrum available for smart cities -- and for citizens.

Policymakers will continue planning for the coming boom in “mega-regional” communities. Beyond the actual infrastructure of roads and bridges and buildings, they should also focus on the policy infrastructure that encourages long-term private investment to deploy the technologies critical to making those roads and buildings smarter and more efficient to future generations.

You may also be interested in…
Video: Verizon on Smart Cities
Report: State of the Market: The Internet of Things 2015
News: White House announces $160 million smart cities initiative